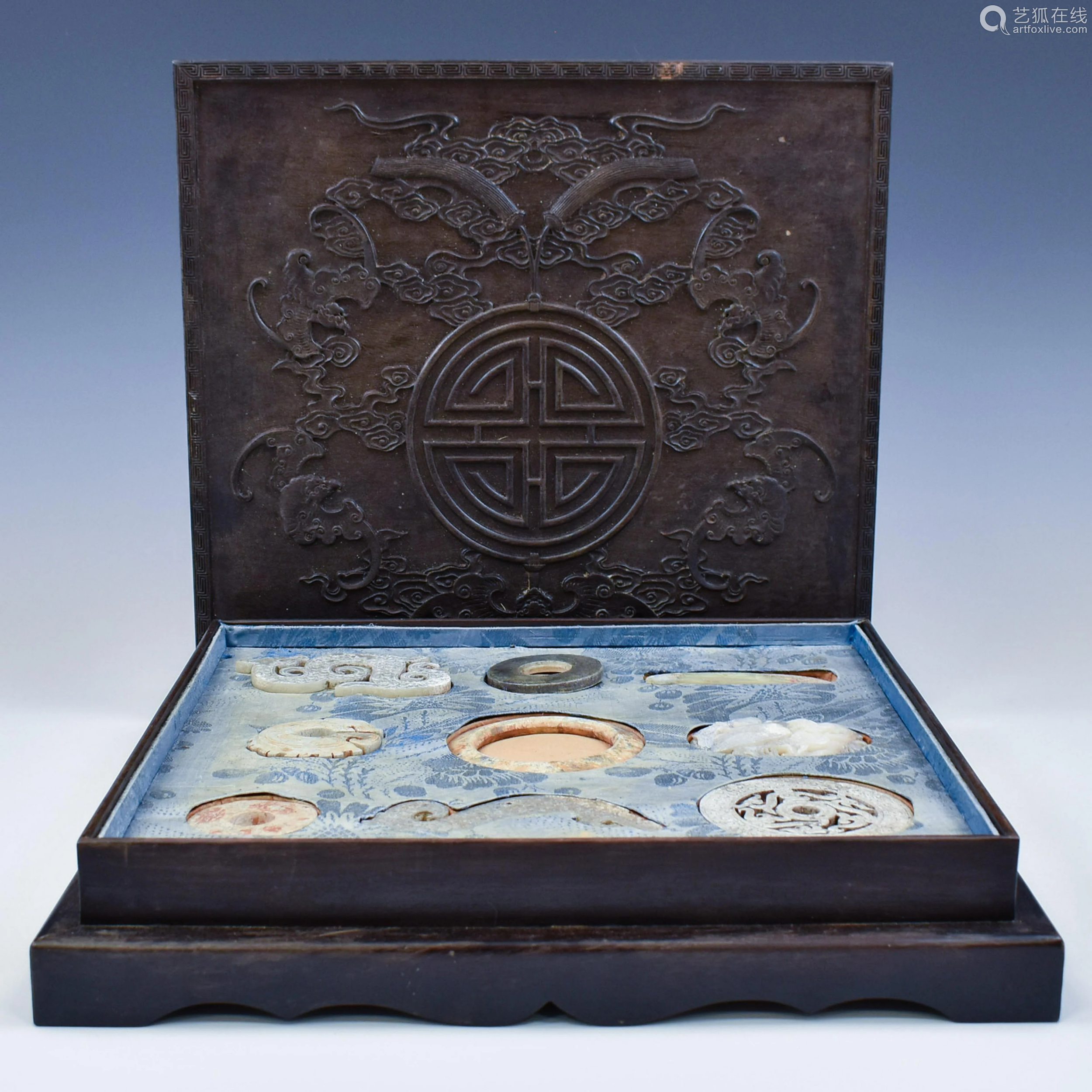 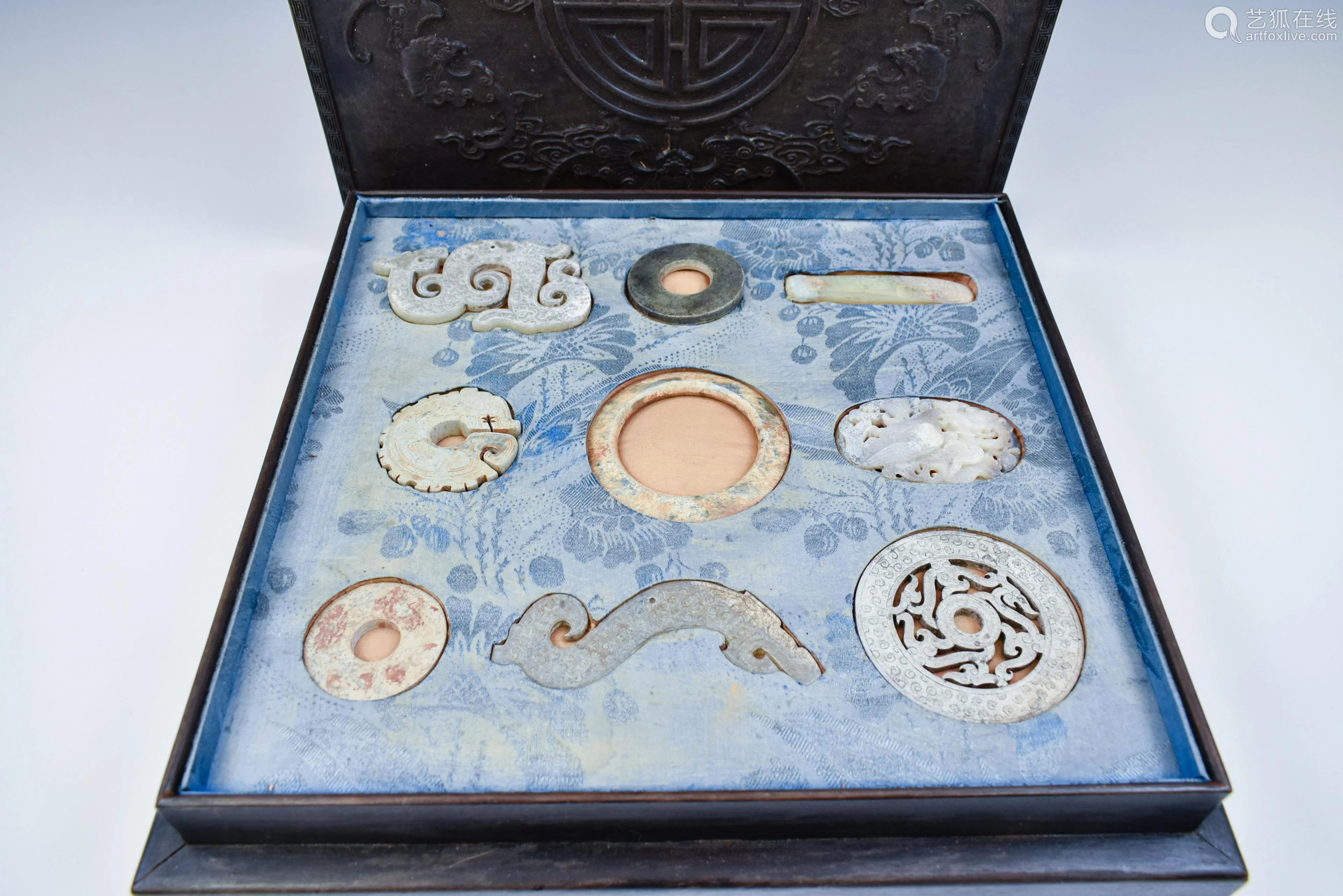 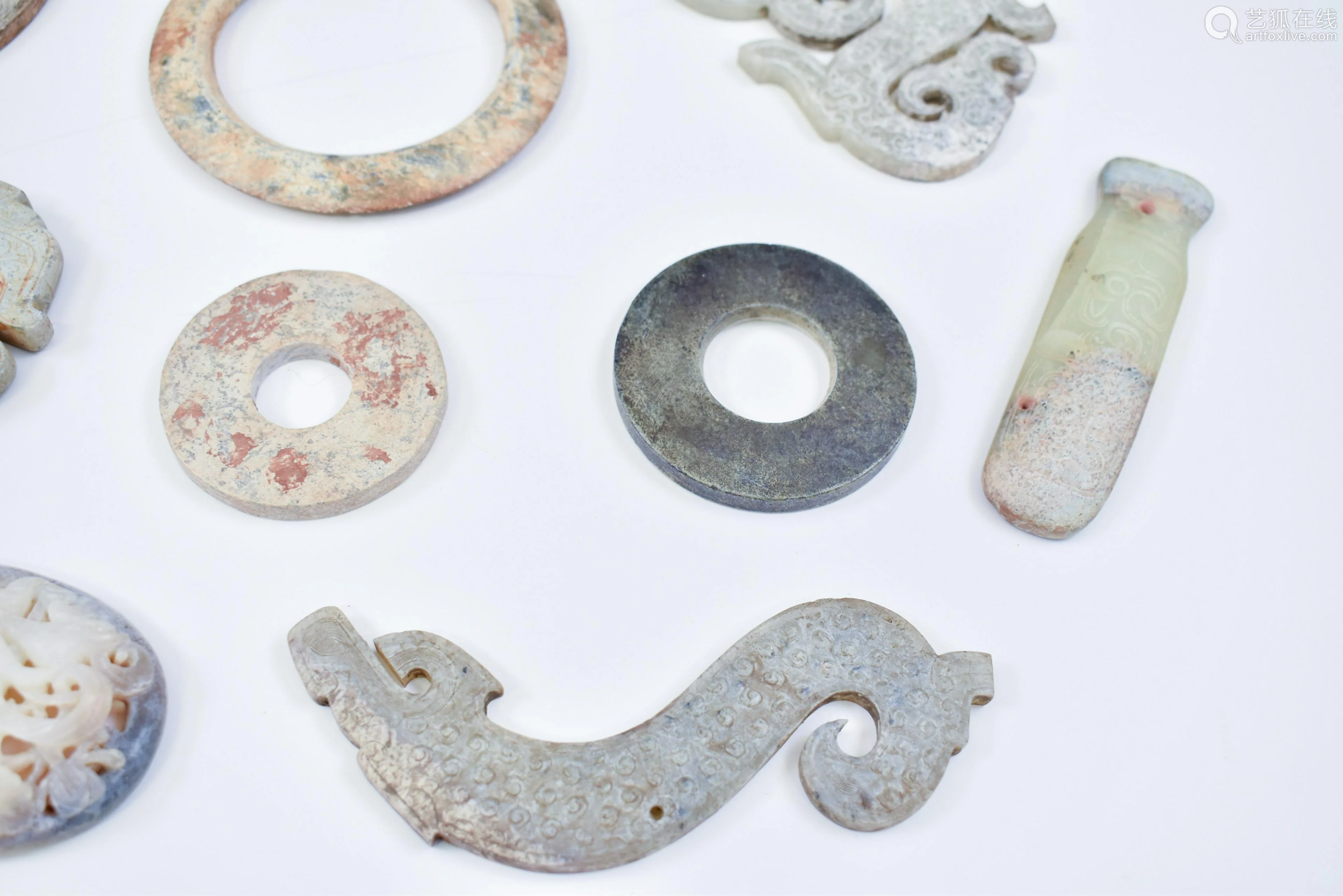 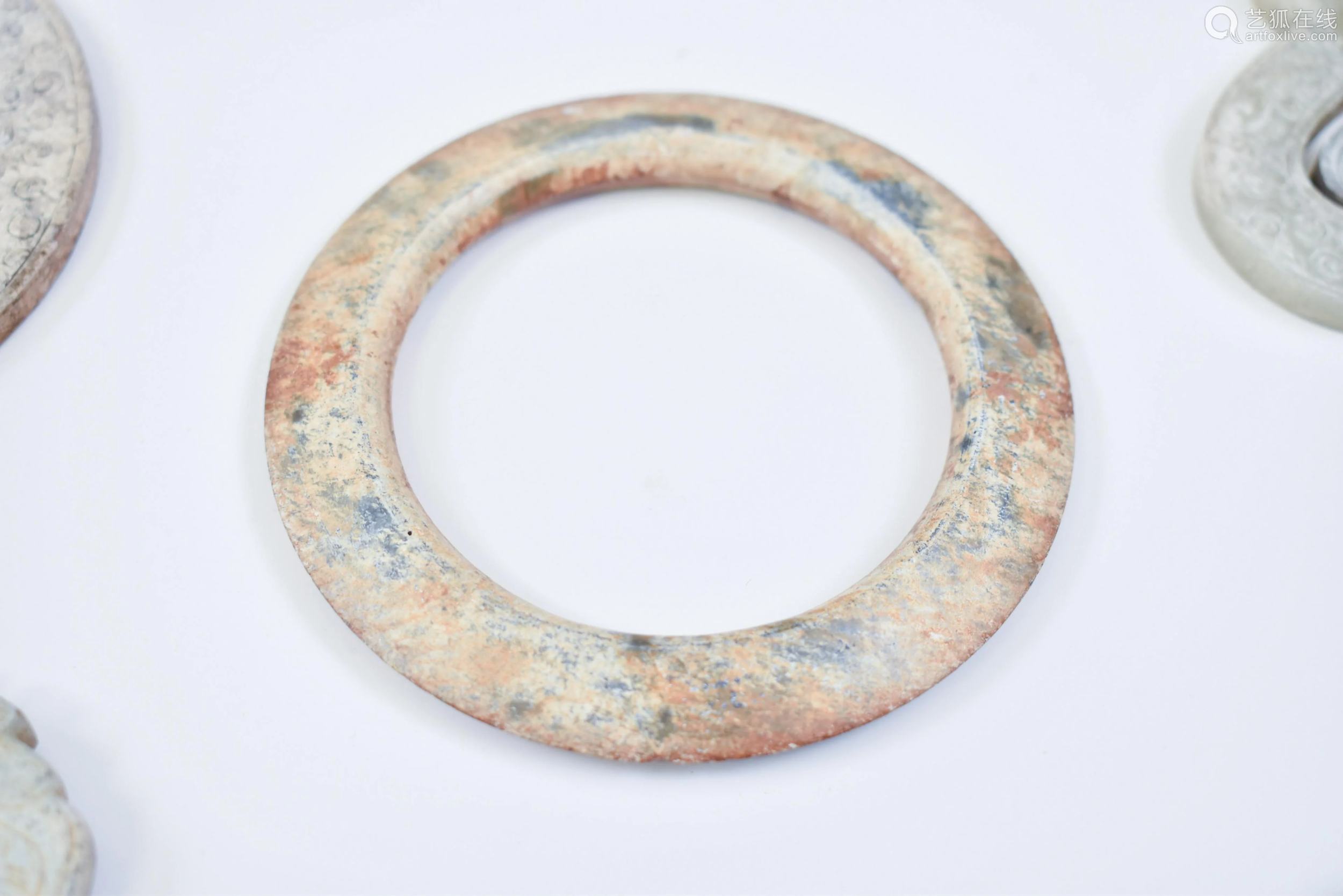 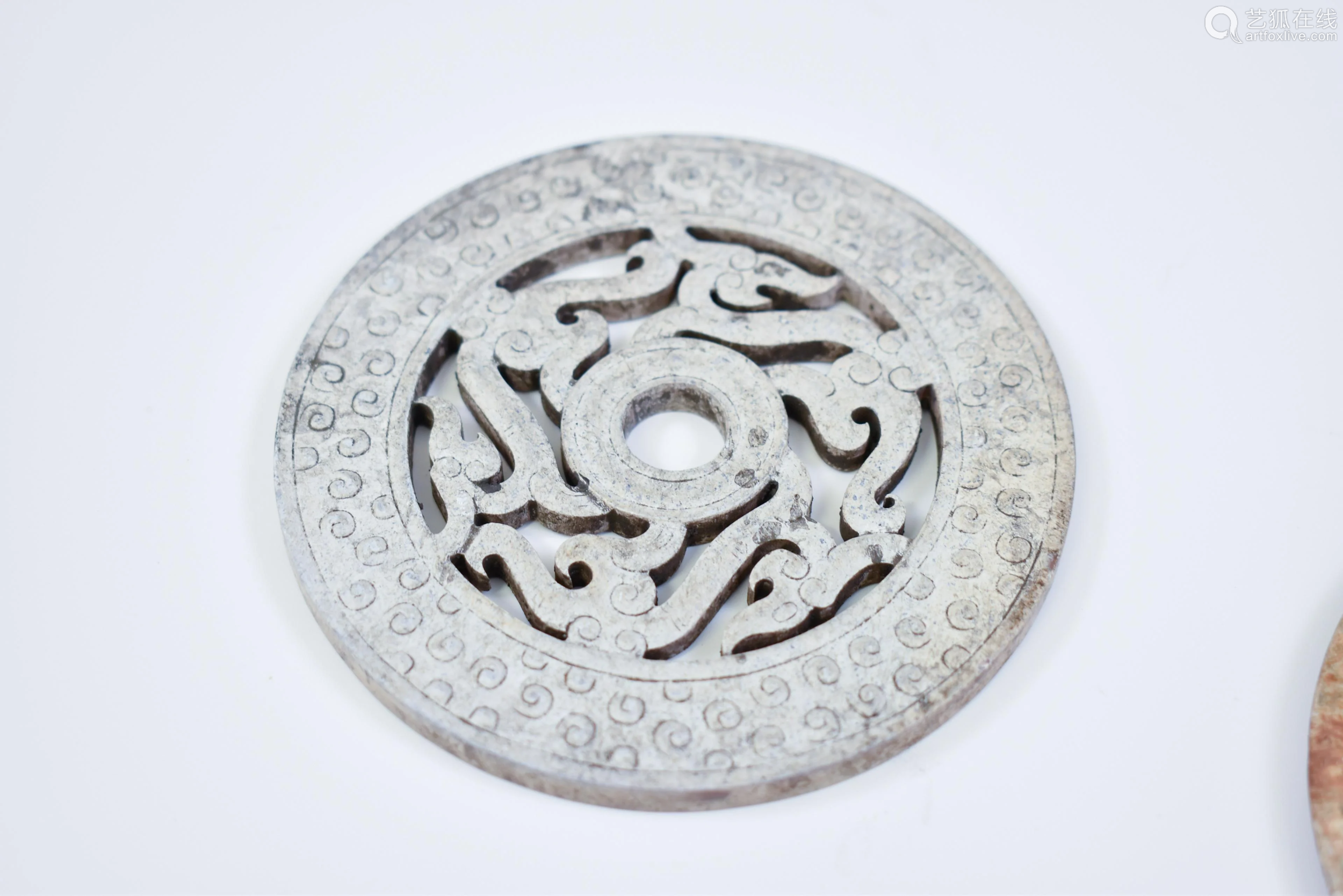 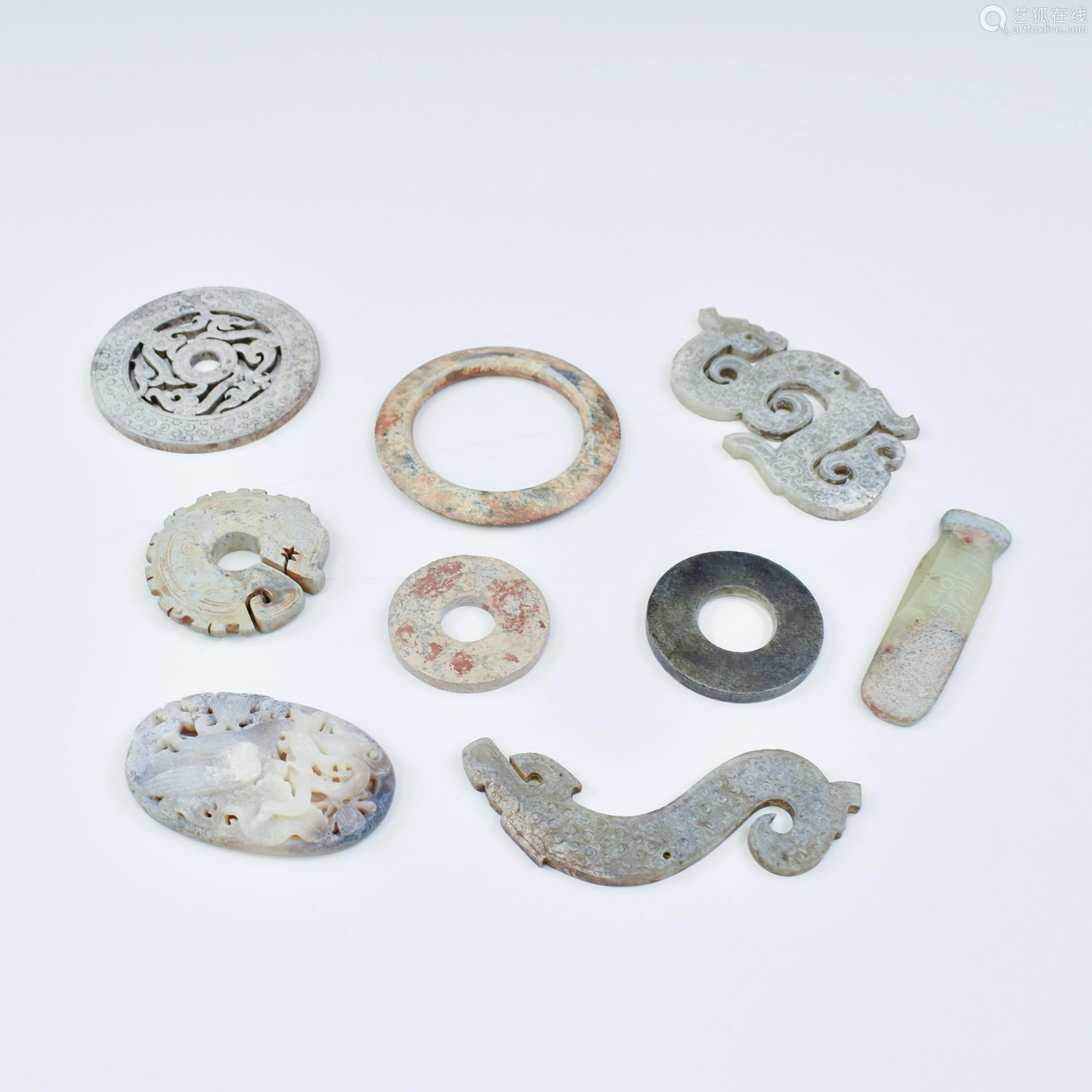 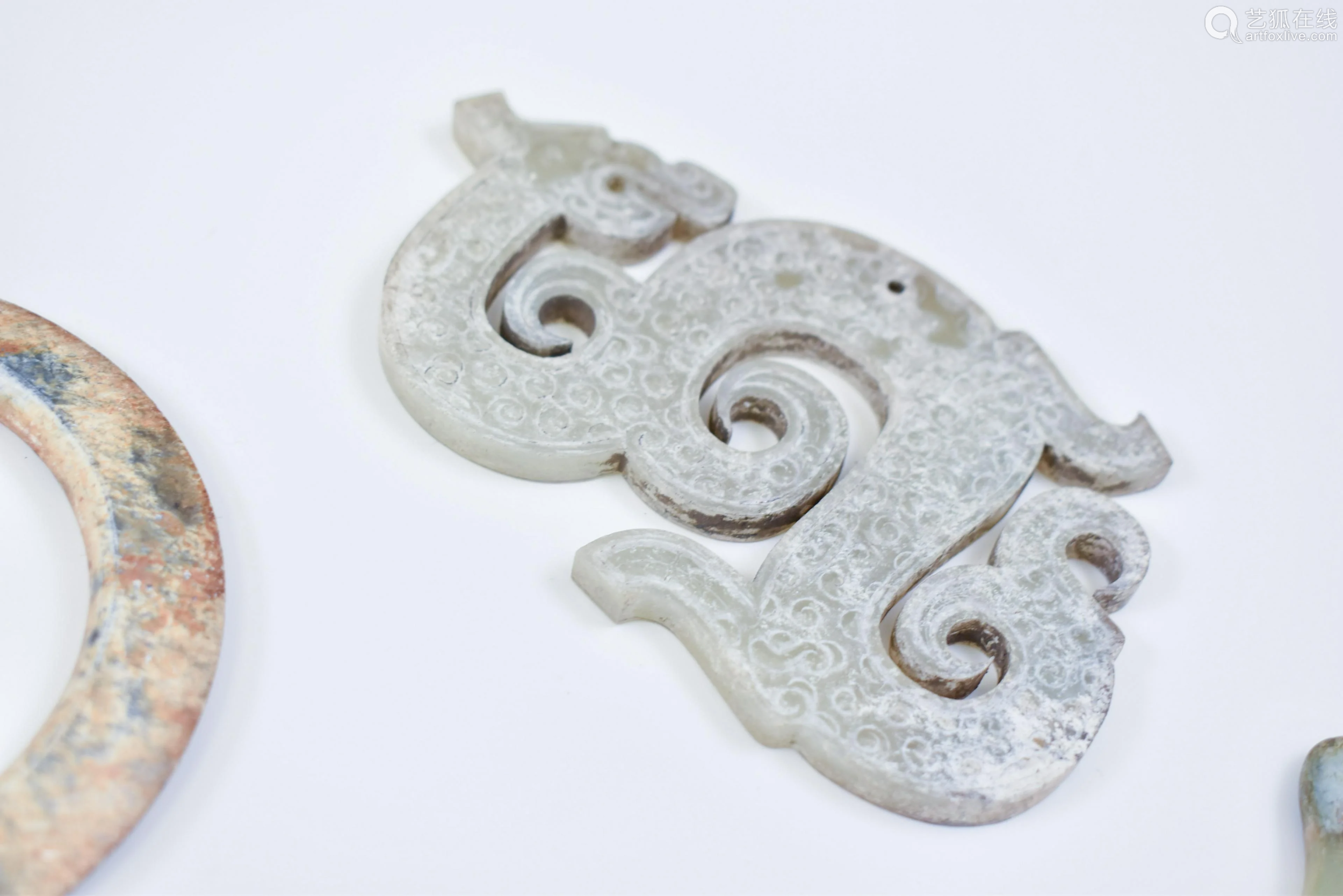 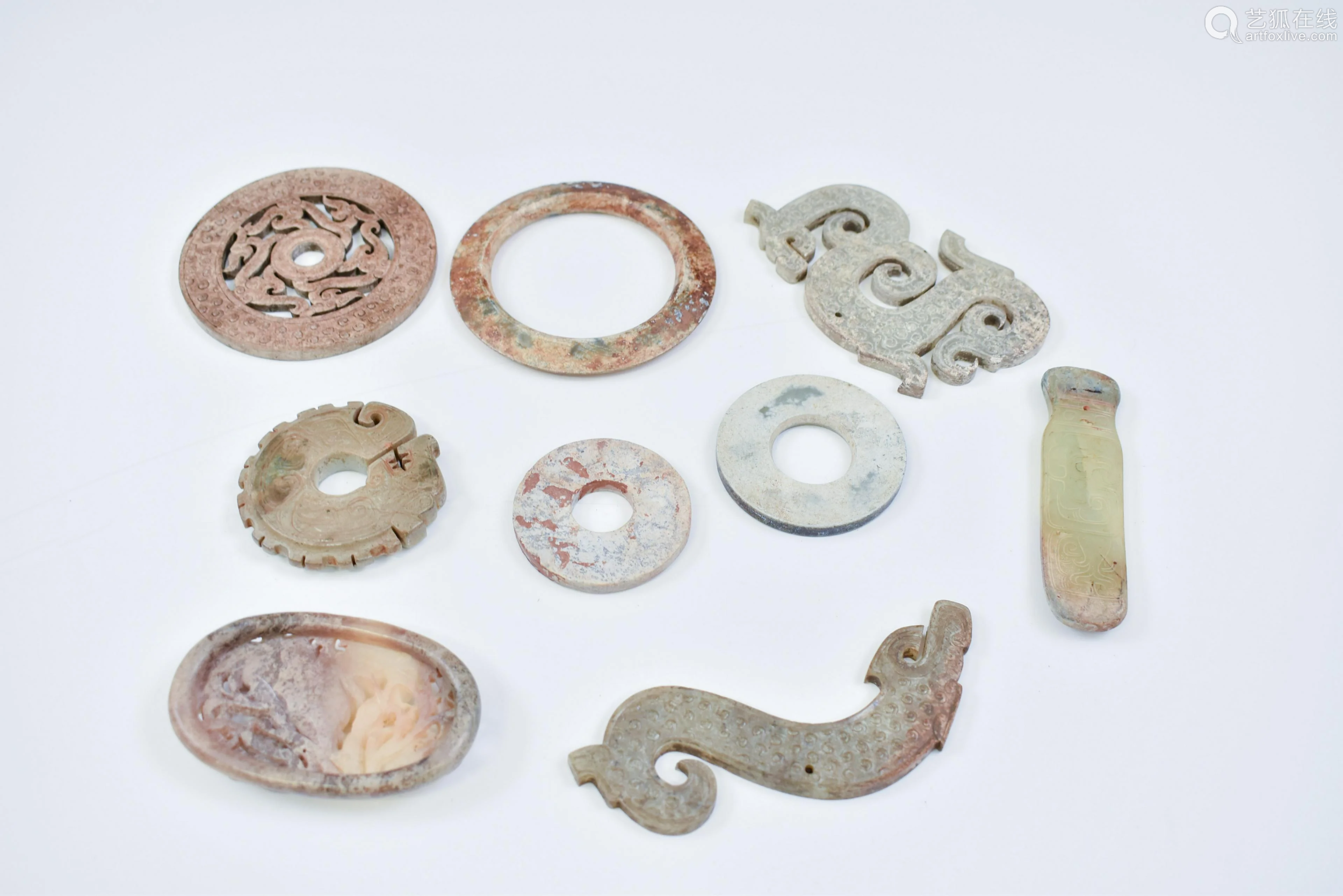 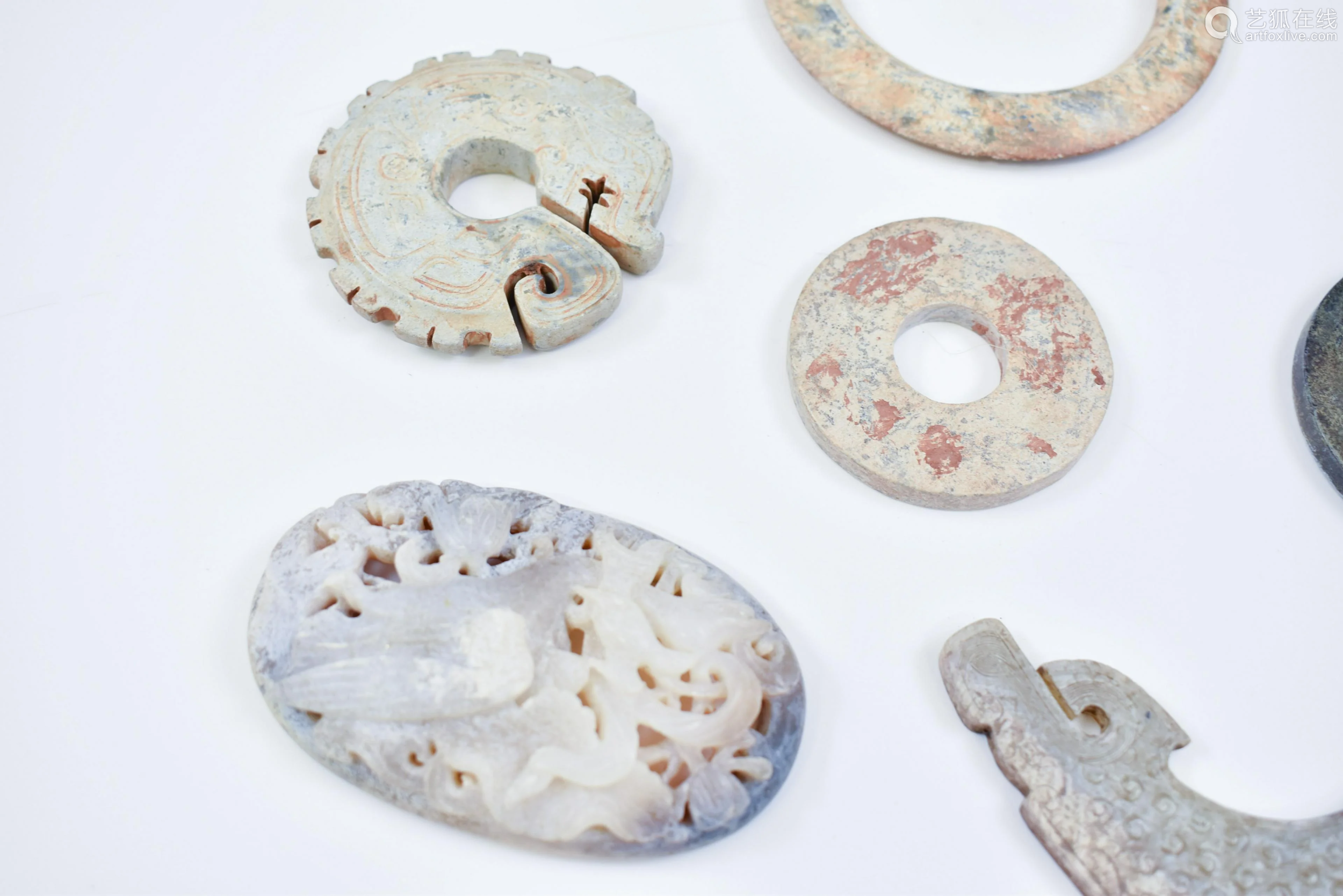 Stunning, Set of Chinese 14 th.C Ming Dynasty, 9 pcs warring states period ceremonial attributes in box. The finest jade carved in eight pieces of ceremonial attributes, group of eight pieces open-work carved Antique Chinese Jade pendants and statues in various size and shapes Including but not limited to female figure, scholar, immortal, praying mantis, endless knots, pig dragon, Bi disk amulets, PiXiu, dragon medallion and archaic talisman implements are present in this collection. Set of Nine ceremonial attributes elegantly presented fits snugly into a natural hardwood stand and fitted original zitan hardwood box, with deep royal blue velvet interior cushion. The nephrite jade stone shows a cream-celadon iridescent with moist milky appearance and golden-brown russet inclusion along the surfaces. The Nephrite jade has mottled appearance with scattered inclusions along with a beautiful transparent milk-white tone, with pale-celadon iridescent and slight attractive sporadic golden russet inclusions, exquisite and detail, the jade stone have clean tone, with pale-celadon iridescent and moist milky appearance. The jade is extremely well carved giving it an aura of splendor. The Expert workmanship is the absolute highlight of this gorgeous nephrite jade screen, a portion of this natural jade is considered quite rare. Notes: Jade is precious because it is rare, and because the quality of jade corresponds to virtue. It relates to such virtues as benevolence, wisdom, righteousness, propriety, loyalty, and trustworthiness, and it also corresponds to the ways of the heaven and earth. Jade is mild and gentle, just like a benevolence. Jade has a fine texture yet it is solid, just like a wise person; with a careful, meticulous and thorough way of handling things. Though jade has edges and corners, it is not sharp and will not hurt others, resembling a sense of justice and uprightness. When the jade is hung, it symbolizes polite restraint and prudence. When it is struck, it releases a clear and spirited sound like music. Though jade is beautiful, blemishes do not obscure its merits. Just like loyalty, it is without bias and without the need to conceal. In addition, the color of jade can be seen from all angles. Just like trustworthiness, a person's behavior is consistent with words. Even in a darkened room, a person is trustworthy and does not cheat others. Jade is crystal like, glittering and translucent as a white rainbow, like the white clouds of heaven, which harmonize the heavens and correspond to heavenly principles. The spirit of the jade can be seen in the landscape, like ‘when jade lies in a deep pool, it makes the river enchanting. When jade rests on the mountain, the grass becomes luxuriant.’ Wherever located, it is bound to have an effect, just like a noble demeanor can harmonize many things and benefit the whole region. People everywhere cherish jade, which is because people respect and admire virtue. The noble virtues are the manifestation of heavenly principles.” Dimensions: Dimensions Center Jade:8mm H x 89mm W Weight: 48g Box: 4.5" H x 4.5" W 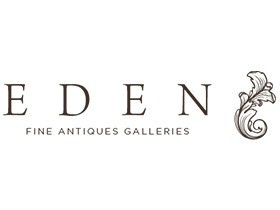 You will be qualified after paid the deposit！

Online payment is available for this session.

Bidding for buyers is available，

This session is a live auction， 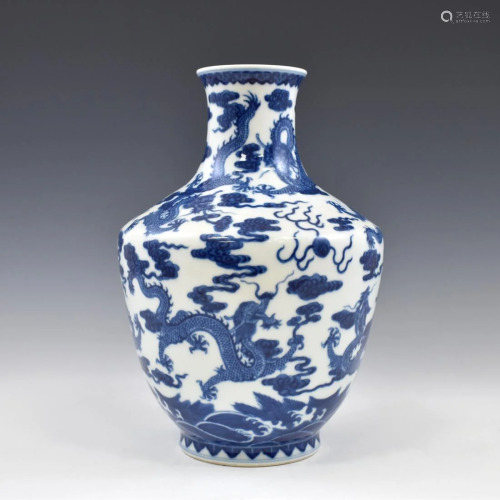 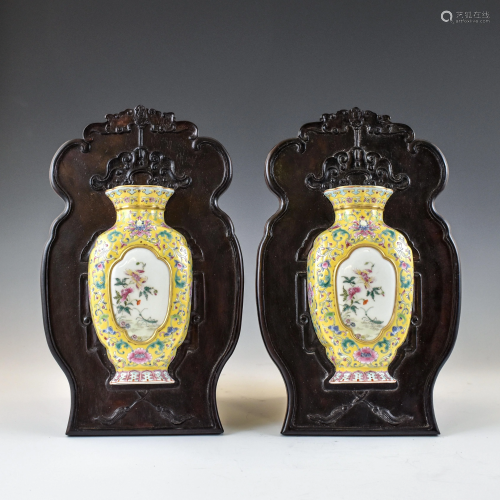 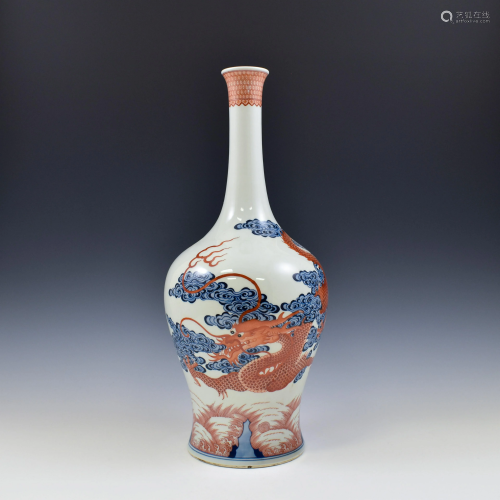 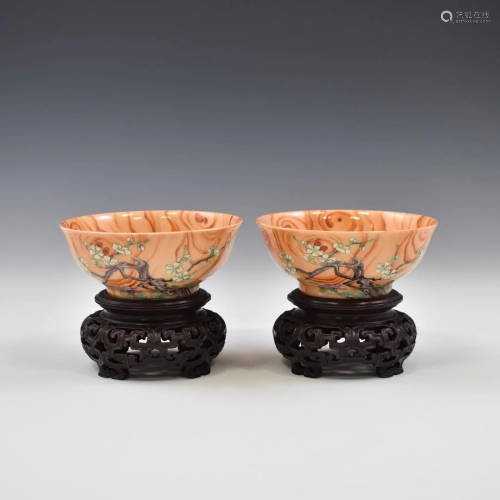 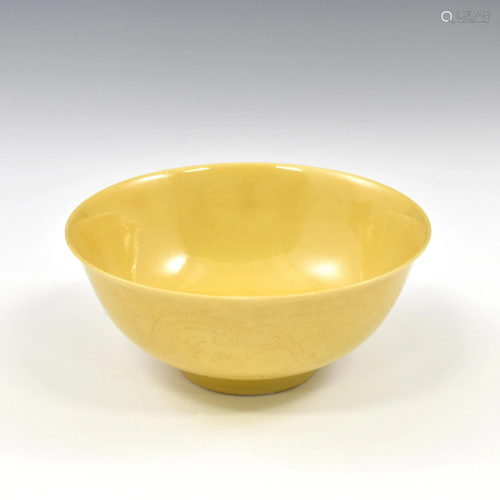 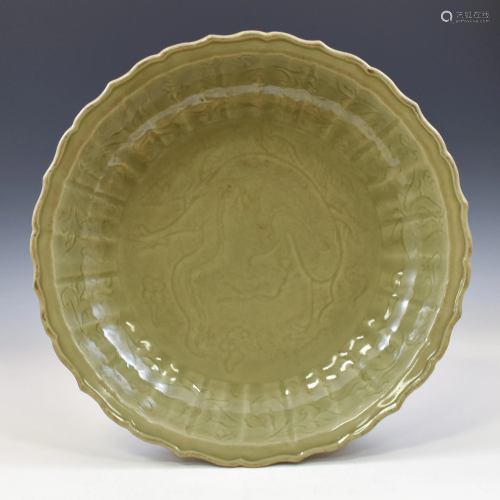 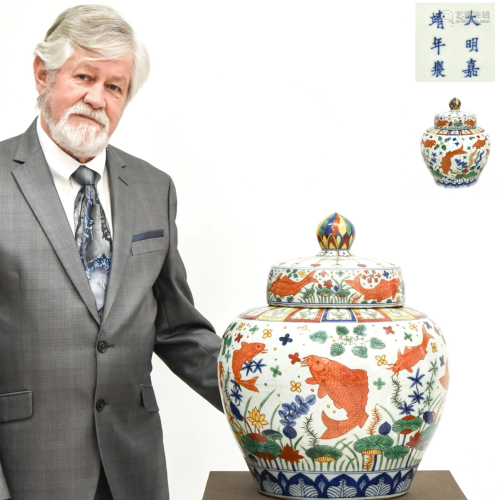 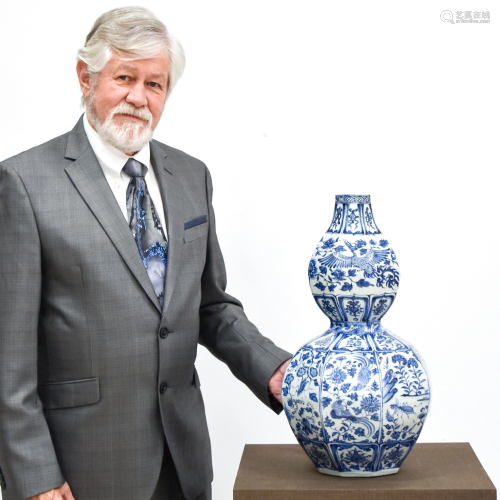 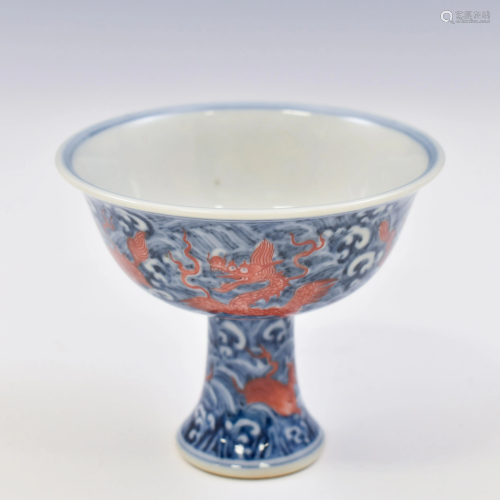 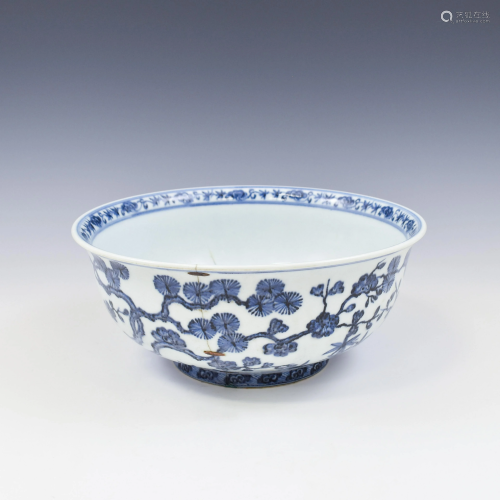 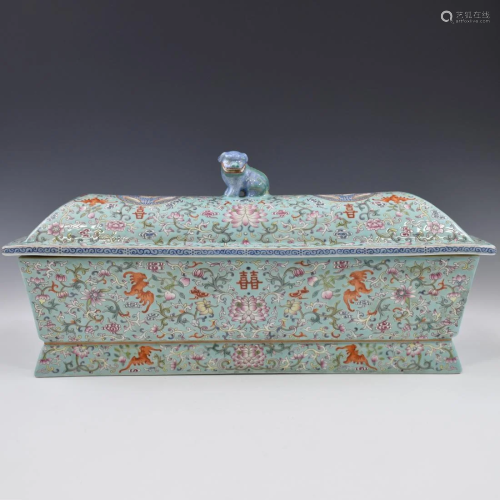 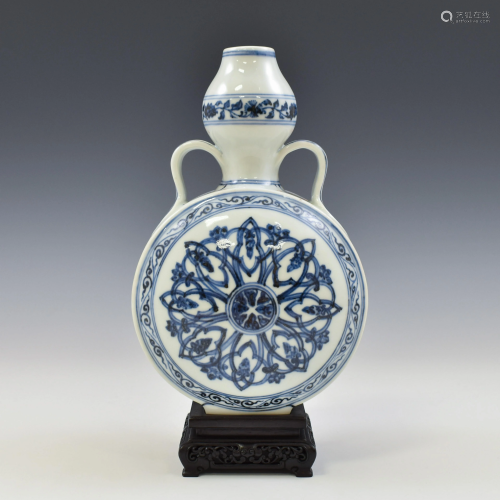 Registration on behalf of

The auction art fox online service on behalf of the film, please leave a contact phone，

The deadline for registration is : (本地时间) 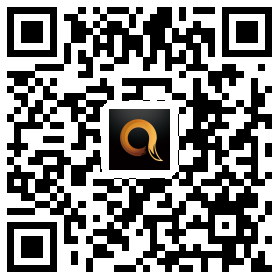 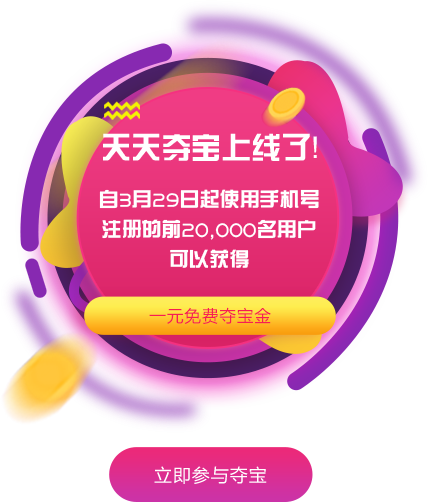 You will not be able to bid and pay the deposit when the current bidding is ended.
Hint

You will not able to bid now when the bid is started or ended.